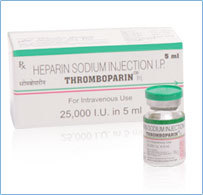 33 INR
Get a Price/Quote

Heparin, an extremely-sulfated glycosaminoglycan, is largely utilized as an inject-able anticoagulant medication, and has a high negative charge denseness of any best-known biologic molecule. It can also be utilized to make an inmost anticoagulant medication surface on different medical and experimental devices such as test tubes and renal dialysis devices. Pharmaceutical class heparin is traced from mucosal tissues of slaughtered meat animals like porcine intestine, bovine lung. Although utilized primarily in medication for anti-coagulation, the true physiological function in the body remains ill-defined, because blood anti-clotting is attained largely by endothelial cell-traced heparan sulfate proteoglycans. The medication is commonly stocked within the secretory grains of mast cells and discharged only into the vasculature at spots of tissue harm. It has been suggested that, rather than anticoagulation, the primary purpose of heparin is in a defensive execution at locations of tissue injury against seizing bacteria and some other foreign physicals. Additionally, it is preserved across a large figure of widely assorted species, including some invertebrates, which do not have a kindred blood coagulation system.

Other Products in 'Antibiotic Drugs' category 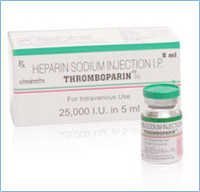